How Does a Ball Valve Work?

A ball valve is a globe valve that controls the flow of a liquid or gas by means of a rotating ball with a bore. By rotating the ball a quarter-turn (90 degrees) around its axis, the medium can flow through or be blocked. They are characterised by their long service life and provide a reliable seal even when the valve is not used for a long period of time. As a result, they are more popular as globe valves than, for example, gate valves. In addition, they are more resistant to contaminated media than most other types of valve. In special versions, ball valves are also used as control valves. This application is less common due to the limited precision in controlling flow compared to other types of control valves. However, ball valves also offer some advantages here. For example, the valve ensures a reliable seal even if the medium becomes dirty.

The valve can have two, three or as many as four ports (2-way, 3-way or 4-way ball valve ). The vast majority of ball valves are 2-way and are operated manually by means of a lever. When the valve is open, the lever is in line with the pipe. In the closed position, the lever is perpendicular to the pipe. The flow direction of the ball valve is simply from the input to the output of the 2-way valve. Manual ball valves can be closed quickly, so there is a risk of water hammer with fast-flowing media. Some ball valves are fitted with a gearbox. Three-way valves have an L-shaped or T-shaped bore, which affects the circuit function (flow direction). As a result, various circuit functions can be implemented, such as distribution or mixing of flows. 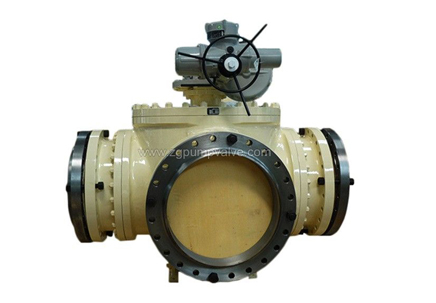 The most common design is the "floating ball design". The ball is suspended in the media and held in place by two sealing rings. Some high-quality valves have a trunnion ball design. The ball is supported at the top and bottom to reduce the load on the valve seats.

Floating: The majority of ball valves have a floating ball. The ball is supported by the valve seats.

Trunnion: Valves with large diameters and high operating pressures (for example DN >100mm and 30 bar) have often a trunnion design. The ball is supported on the bottom and top to reduce the load on the seat rings. The operating torque is generally lower for trunnion valves.

The hole through the ball may have different profiles such as a full bore, reduced bore or V-shaped. 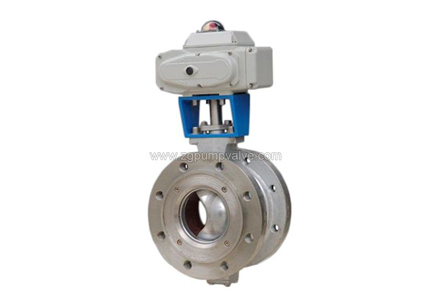 Reduced bore: Most ball valves parts have a reduced bore. As a result, the ball valve introduces friction losses in the system. These losses are still relatively small compared to other types of valves. One-piece ball valves are almost always reduced bore.

Full bore: Full bore valves have the same bore diameter as the pipe. The advantage is that there are no extra friction losses and that the system is mechanically easier to clean (pigging). The downside is that the ball and the housing are bigger than a standard ball valve with the reduced bore. The cost is therefore slightly higher, and for many applications, this is not required. They are also called full port ball valves.

V-shaped: The hole in the ball or the valve seat has a "V" shaped profile. As a result, the desired flow rate can be controlled more precisely by rotating the ball. By optimizing the profile, a linear flow characteristic can be approached.

What Is Self Priming Pump？

How To Select a Centrifugal Pump?