Axial Flow Pump article provides guidance and review about different types, qualities, durabilities, and prices. The pump is a pump in which fluid flows axially to the rotation of the propeller. In Axial flow, the fluid flows parallel to the axis of rotation, as in a turbine. Axial flow pump contains a propeller or centrifugal impeller in the casing.

An impeller is the rotating component of a centrifugal pump that accelerates the fluid inside the pump. The propeller is powered by a sealed motor or external electric power, gasoline engine, or other power sources The fluids gain velocity, and it is transformed into pressure as the fluid leaves the pump. Fluid particles do not change their radial locations while flowing since the radius at the suction and the discharge of the pump are unchanged or of very small variation. 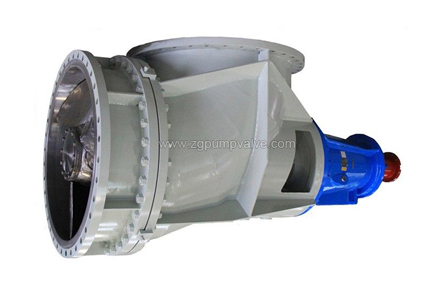 When the centrifugal force becomes greater than the gravitational force holding the fluid, the fluid rises and flows outside the pipe. Here the conversion of energy is done using the angular momentum principles. The axial flow or propeller pump is the converse of the axial flow turbine and is look alike in appearance.

When selecting an axial flow pump, we have to consider the following key specifications as follows.

Flow rate - the rate at which the fluid flows through the pump, measured in gallons per minute (GPM). The flow rate and the rated capacity of pumps must match for smoother operation.

Pressure – resistance force per unit area, the pump must handle, described in bar or psi.

Head - height up to which the fluid is lifted above the suction inlet. It is expressed in terms of length as meter or feet.

Output power- power produced or given by the pump. And it is measured in Horsepower(HP)

Input power- power required by the pump for operation. And it is also measured in Horsepower(HP)

Efficiency - the ratio between the input power and the output power. It just describes to us the amount of input power utilized for pumping action. 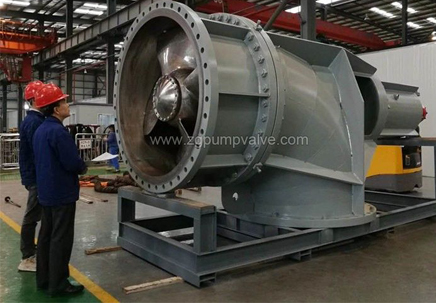 Axial flow pumps are found mainly in sewage treatment plants and agricultural irrigation. They are also used in fisheries flood control operations, chemical industries, power plants, etc. One of the simplest applications used in our day-to-day life is the hand pump through which we get the water supply from the underground. Here our human effort is the power supply which drives the water supply from the underground.

In agriculture & fisheries, these pumps are used to pump water for irrigation purposes and drainage of unwanted water. They can give a large flow of water from nearby waterways to crops. In East Asia, smaller farmers use this kind of pump for crop irrigation, drainage, and fisheries. In the sewage treatment plants, they are used for the transfer of fluids across the different conveyors and reservoirs. The direction of the flow is easily reversed in these types of pumps.

Axial flow pumps circulate large amounts of liquid in evaporators and crystallizers in chemical industries. They are also used in flood disaster management systems because they can pump out a large amount of water during a crises time. One such example was they are used in the flood control system in New Orleans, Louisiana where the stormwater is stored in a canal and later pumped to the nearby lake. Thereby saving thousands of lives and helping in water storage also.

Easily be adjusted to run at peak efficiency

Smaller in dimensions so easy to handle & use.

The above information is provided by the axial flow pump manufacturer.

Guide To Selecting The Right Slurry Pump For Your Application